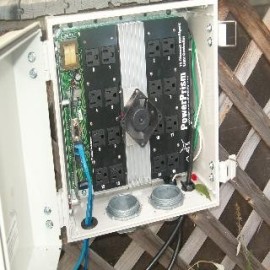 This is the equipment used to bring "Magical Christmas" to life.

How does it work?

We get that question alot, We program the songs using LOR-S3 software that gives us the ability to sequence the lights in perfect time with the music. Plus we can add effects like fade, shimmer,  ect...After the programming is finished (many hours later since it takes approximately 8 hours of programming for one minute of music) it is then moved to our show computer, using (2) two usb to rj485 dongles one for standard LOR protocol the other for DMX are connected to our controllers outside using cat5 cable to send the show information to it's respective controllers. All of the controllers are linked together with cat5 cable and each controller can handle up to a 30amp load. The music is handled by 2 Yamaha outdoor speakers for those people that get out of their cars, plus it allows us to monitor the show. For those in their car we send the audio signal with a low powered FM transmitter locked in at 101.5. Both the speakers and the FM transmitter are getting their signal from the computers audio output.

How much does you electric bill go up?

The show runs 5 hours per night average,with both the computerized display and the static display at full intensity we are pulling between 130-150amps. Our electric bill goes up between $120-$150 dollars for the Christmas Season.

Why do you do it?

First, to honor the birth of Jesus. We look at our display as a huge birthday cake in honor of him. We want everyone to recognize that He is the Reason for the Season.

We LOVE Christmas! The looks on the faces of the children from 5-85 is priceless. If we can create Christmas memories or even family traditions to those who see the display, then that by itself is enough to start preparing for the next year.

How long does it take?

We start preparing music and display layout in March, start programming in April. Start building the new features of the display in September the installation and testing takes about 3 weekends starting the first Saturday in November,so the answer would be, it is basically a year round thing.